Westgate Elementary School opened on September 3, 1968. The history of Westgate is uniquely intertwined with the history of Pimmit Hills, a former Fairfax County elementary school. In December 1952, the Fairfax County Board of Supervisors toured the newly built 1,100 home Pimmit Hills subdivision and learned from Fairfax County Public Schools (FCPS) officials that a recent survey showed 750 children from only 473 homes in the neighborhood would enter county schools by 1958. Pimmit Hills Elementary School opened in 1955. As the number of school-age children in the Pimmit Hills community steadily rose over the next decade, a new school was desperately needed. In October 1965, trustees of the Westgate Corporation donated land to the Fairfax County School Board for a school site.

Westgate Elementary School was designed by the architecture firm of Beery & Rio, and built by the Whyte Construction Company for $592,750. Fairfax County School Board records indicate the building was designed in partnership with the United States Office of Civil Defense for use as a fallout shelter in the event of nuclear war. Earl C. Funderburk, Superintendent of Fairfax County Schools at the time, said:

We feel we are in a position of leadership and influence here in Fairfax County and for that reason have gone into this shelter program as an experiment. We never know what can be done until we try. The Board has unanimously agreed to build the school with a shelter for 800 people meeting the Office of Civil Defense standards. This is a valuable service that the school can render to the community which will add to the country’s defense.

Designing Westgate for use as fallout shelter proved less expensive that initially feared, costing only $20,000 more than the agreed-to contract price with Whyte Construction. The additional funding equipped the building with a heavy air filtration system, an extra water supply, and a generator.

From 1955 to 1967, Zella C. Keys served as principal of Pimmit Hills Elementary School. She passed away on December 23, 1967 and was succeeded in January 1968 by John G. Earman, who served as principal of both Pimmit Hills and Westgate until 1970. The assistant principal in charge of Westgate Elementary School when it opened was Barbara I. Smith. In 1970, when two separate principals were established, Barbara I. Smith was appointed to the position of principal at Westgate. During Smith’s time as principal, the Virginia Department of Education provided a $10,000 grant to study a proposal to make Westgate and Fairfax High School year-round schools. Under the tentative proposal, the school year would entail four nine-week grading periods, separated by vacation periods lasting three weeks in duration. Principal Smith stated that the reasoning behind the proposal was that young children would forget less information with the shorter vacation periods. Residents of the Pimmit Hills community voiced their opposition to the proposal and the idea was scrapped. Barbara Smith served as principal until February 1973, resigning mid-year because her husband, a foreign service officer with the United States Department of State, was being sent to Nepal on assignment. Smith was succeeded by Nancy Ann Poole, who had been the assistant principal at Kings Park Elementary School since 1969. During Poole’s time as principal, the grade level split between Westgate and Pimmit Hills shifted to K-3 at Westgate and 4-6 at Pimmit Hills.

As the 1970s drew to a close, student enrollment in FCPS was in steep decline necessitating the closing of several schools. From 1976 to 1980, enrollment at Pimmit Hills dropped from 287 to 231, and plummeted at Westgate from 423 to 280. With the likely closure of one of the schools looming, the combined Pimmit Hills / Westgate PTA presented the School Board with a proposal to close Pimmit Hills and consolidate the students at Westgate. The proposal would phase-in the change with the rising 4th graders remaining at Westgate and the 5th and 6th grade classes continuing at Pimmit Hills during the 1981-82 school year. The phase-in would be completed in the 1982-83 school year with the rising 6th graders going to Westgate. The Board agreed to the proposal and Pimmit Hills Elementary School closed permanently in June 1982. Following its closure, Pimmit Hills was converted into an adult and community education center, and, from 1982 to 2010, the building also housed Pimmit Hills Alternative High School.

When Westgate Elementary School opened in 1968, the building lacked several things we take for granted today, such as air-conditioning, a gymnasium, and classrooms for music and art. In the 1970s then principal Nancy Ann Poole wrote a letter to FCPS officials in which she described how the lack of air conditioning resulted in sweltering conditions in some of the classrooms on hot days. Our school originally had 20-classrooms and a multi-purpose room that functioned as a cafeteria and auditorium. Physical education was taught by the classroom teachers in their rooms or through structured play outdoors. It wasn’t until after voters approved the 1984 School Bond Referendum that funding became available for school improvements.

On January 9, 1986, the School Board awarded a contract for the construction of a combination gymnasium and music room to Patrick Quinn, Inc., for $1,128,000. Central air conditioning was added in 1992 by Capitol Contractors, Inc., for $374,930. Our first major building-wide renovation took place from 2014-16. See the renovation unfold in this series of aerial photographs. 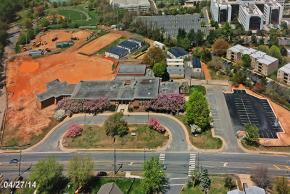 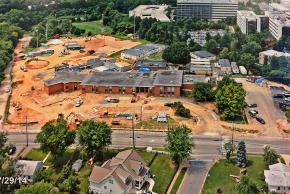 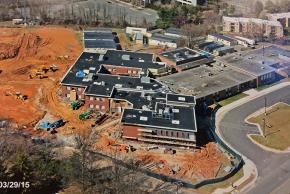 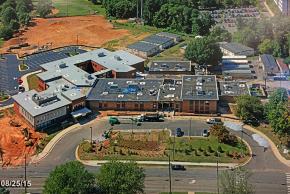 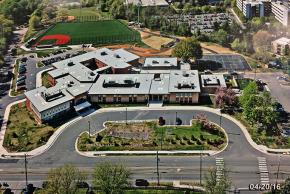 What’s in a Name?

Learn about the origin of our school's name is this video produced by Fairfax County Public Schools' cable television channel Red Apple 21.